Cooking steak can be intimidating to many, but it doesn’t need to be.  Follow these five easy steps to getting that steak house steak at home and for half the cost.  You will need a good cast iron skillet to make the perfect steak.  I use and recommend Lodge Brand Cast Iron.

About a half hour before cooking take your steaks out of the fridge and set out on a plate. Heat your oven to 350 degrees.  Rub a little bit of vegetable oil all over the entire perimeter of the steaks.  Next salt and pepper both sides of the meat and press in with your fingers.

Get some fresh herbs, I used rosemary, and a couple of pats of butter. Add the butter to your cast iron skillet and then heat your cast iron skillet up until it gets really hot.  It should be heated to the point where it’s just about to start smoking, but it shouldn’t be smoking.  Take the fresh herb in a pair of tongs and swirl it around in the melted butter for a few swoops. I didn’t take the rosemary off the stem for this step.  Remove it from the pan, you can discard it or use it as a garnish.

Take your whole cast iron skillet and pop it in the oven. Now this is the only tricky part.  I personally like my steaks, medium rare to even rare (the way meat should be eaten). The size, thickness and cut of your steak will also matter during this step.  I was cooking a filet and an average sized, medium thick, bone in strip. In order to get the medium rare/rare temp. I only needed to leave my strip steak in the oven for about 7 minutes and my filet about 10 minutes.  Now you can use a meat thermometer to test the internal temperature, and you should for the first few times you make steak. (I like mine cooked to just under 125 degrees) Remember the meat keeps cooking for a bit after you take it off the heat, and will rise at least five degrees. I personally do not like to use a thermometer cause I hate poking holes in the meat, I want to keep the juices inside.  BUT, the first few times you should use a thermometer, also press on the steak with your tongs, before, during and after, so you begin to know how the meat should feel when it’s at the perfect temp.  If you make a memory of this every time you cook steak, you will be able to tell by instinct or by pressing down on the meat.  Remember it’s always better to take it out too early because then you can always put the meat back in if it is underdone, then to let it cook too long and be overcooked. 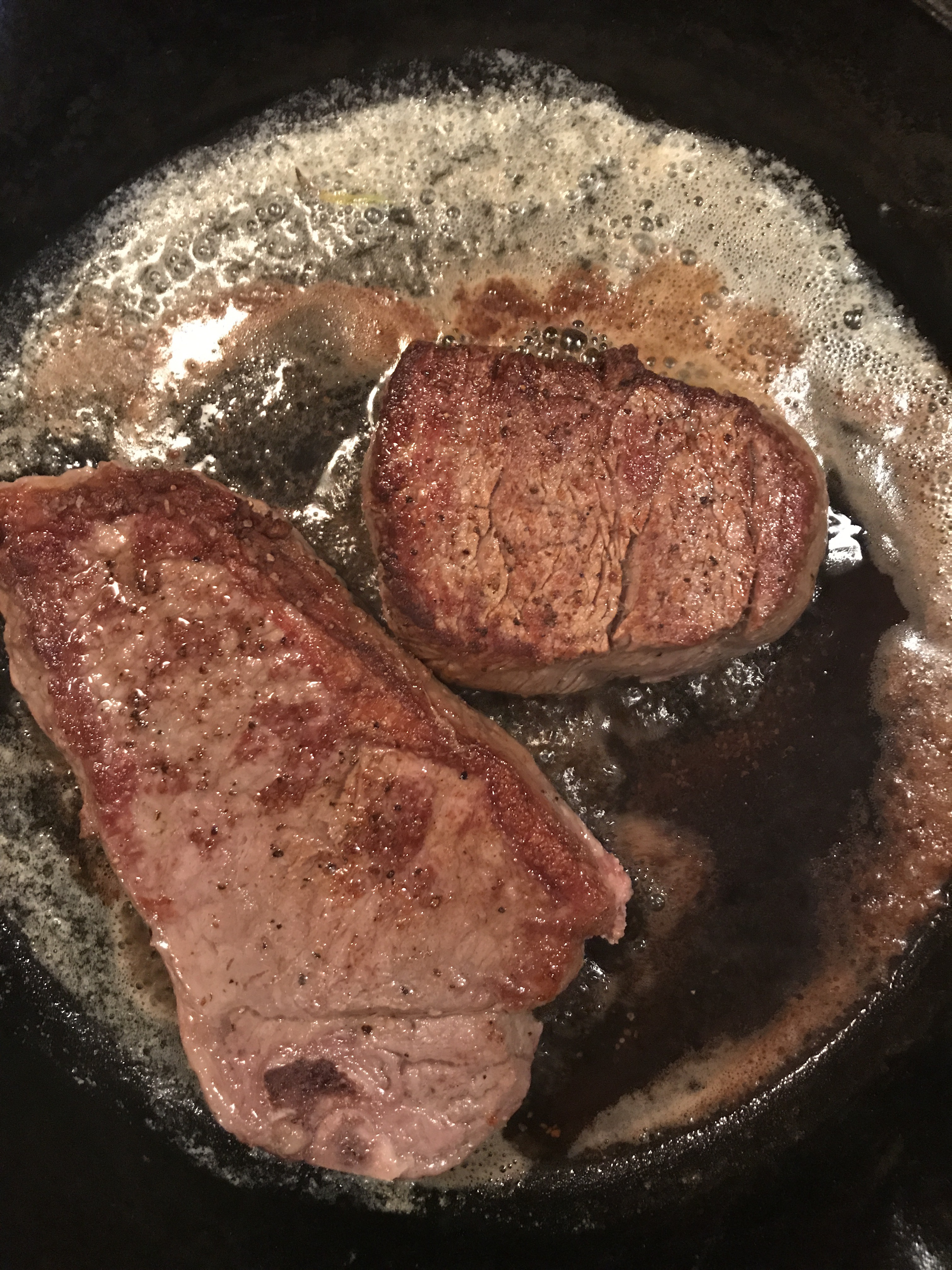 Take the steak out and let it rest on a plate for about 10 minutes, loosely covered with foil, before cutting into it.  This help the juices redistribute.  While the meat is resting I like to sauté onions in the same pan I cooked the steaks in so they pick up the bits of steak and butter.  I only cook them enough to soften, but where they still have some crunch.  You can also add mushrooms to this.  Serve on top of your rested meat.  You can also serve with warm butter.

PS. I got the steaks pictured from this great new company called I Heart Meat that delivers prime, dry aged, quality steaks, next day (except weekends) and at more than half the cost, to Chicago folks who live downtown! It’s a great concept for a delicious night in!

Happy Birthday America! We have been busy over her

The most perfect almost no cook recipe for summer.

My cousins came to visit and my little cousin make

Chip Dip made ONLY for Doritos! ✔️10 Slices O

If you’re looking for a Fourth of July breakfast

These green beans are one of the first things I ma

Any cookies that may not be particularly necessary for the website to function and is used specifically to collect user personal data via analytics, ads, other embedded contents are termed as non-necessary cookies. It is mandatory to procure user consent prior to running these cookies on your website.