Someone I know always orders the chopped steak at restaurants because he is afraid it will be taken off the menu and go extinct if people don’t order it.  I’m not exactly sure where the concern comes from, but clearly the dish evokes a memory for that person that he doesn’t want to see die.

I think we all have certain foods that are connected to memories of a good time or a specific person and with the lapse in teaching cooking skills to recent generations, a lot of these recipes have literally and figuratively died with their keepers.

Thinking on this I decided to dig out some cookbooks and collected recipe clippings  my Grandma let me take when I cleaned out her garage years ago.

While perusing these recipes I realized that people my age (40) and younger rarely make these “old fashioned” recipes of our grandparents and great grandparents generation.  Why is this? The recipes are usually quite simple to make, can easily feed quite a few people, and most of all, are super affordable. It’s true that a lot of them are not the most health conscious but most can be easily modified to reduce fat, calories, carbs and sugar.

I have made it my mission to revive some of these recipes and make them a more common part of my cooking repertoire.

So I decided to revive A diner favorite The Chopped Steak, as a testament of support to my chopped steak advocate friend. It was simple to make, especially if you have semi decent knife skills, it cooked quickly, and it can be modified easily to be quite healthy. 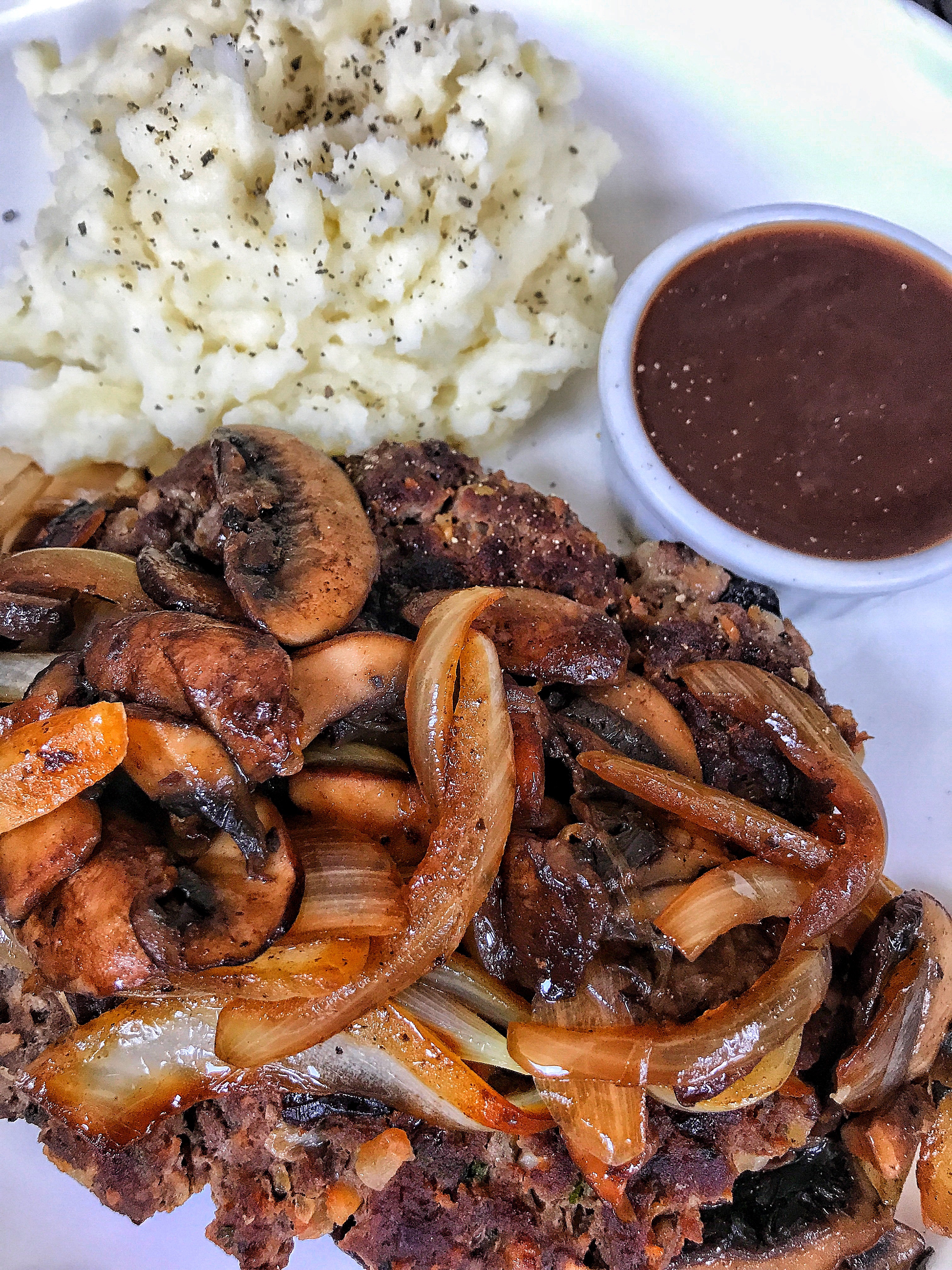 Once you get your ingredients prepped it’s easy from there.

First step, dump all the ingredients in a large bowl with your protein choice EXCEPT for the sliced mushrooms and sliced onions.

Next, mix it all together, with your hands, really, really well. After you get the ingredients mixed well, form 4 to 5 large balls of the mixture. Their size should be bigger than a baseball but smaller than a softball.

Then, allow the balls to sit on the counter for about 20 minutes.

Whatever pan you’re using, get it fairly hot. I used a little coconut oil to grease the pan, but butter or other oils are fine too.

Then, press the balls of meat until they are oblong and fairly flat, but should be about a ribeye steak size thickness.

This final step is simple, place patties on pan and let cook on each side about 10 minutes. I like mine a little pink inside, but basically cook them until you won’t get sick from eating them.   The outside should have a little crispness to them.

Remove patties from pan and place on a paper towel covered dish.

While the pan is still hot, and has the beautiful bits of meat and onions from the patties, throw in all the sliced mushrooms and onions. Cook until both are just softened but still have a little bite to them.

Anywho, off to tell the Chopped Steak Savior that I’ve joined forces to help revive this delicious meat icon.

For Another Classic Housewife Recipe Check Out This Recipe For Spaghetti Sauce !

This website uses cookies to improve your experience while you navigate through the website. Out of these cookies, the cookies that are categorized as necessary are stored on your browser as they are essential for the working of basic functionalities of the website. We also use third-party cookies that help us analyze and understand how you use this website. These cookies will be stored in your browser only with your consent. You also have the option to opt-out of these cookies. But opting out of some of these cookies may have an effect on your browsing experience.
Necessary Always Enabled
Necessary cookies are absolutely essential for the website to function properly. This category only includes cookies that ensures basic functionalities and security features of the website. These cookies do not store any personal information.
Non-necessary
Any cookies that may not be particularly necessary for the website to function and is used specifically to collect user personal data via analytics, ads, other embedded contents are termed as non-necessary cookies. It is mandatory to procure user consent prior to running these cookies on your website.
SAVE & ACCEPT
Loading Comments...